AMES, Iowa — Authorities said crackdown on cannabidiol oil is underway as CBD oil is illegally sold in stores across Iowa.

Products containing CBD oil are illegal in Iowa unless they come from a dispensary, but that hasn’t stopped retailers from selling CBD products.

A Family Video in Ames advertises CBD products in the window, claiming gummies and water sold there can help with migraines, asthma, stress, or Crohn’s disease.

“What we’re seeing is lotions, oils … even some infused shampoos, gummies that they’re selling in some of these stores,” Ames police Cmdr. Jason Tuttle said.

Tuttle said the products are against the law in Iowa unless the purchaser has a prescription for a specific medical condition and the CBD products are purchased at one of Iowa’s five legal dispensaries.

The only CBD dispensary in central Iowa is in Windsor Heights.

“We’re really putting people on notice that these items are illegal,” Tuttle said. “I think a lot of stores have no idea that that’s the case. So, we want to get the word out. We’re not going to show up at the stores tomorrow with our SWAT team and seize any products.”

Employees at Wheatsfield Cooperative in Ames said they just recently took all CBD items off their shelves.

The Iowa Department of Public Health warns the content, quality and safety of cannabidiol products have not been regulated by a federal or state agency.

The Story County Attorney Office said anyone who possesses illegal CBD products should destroy them immediately.

“We’ve heard from some other counties that have confiscated some products,” Tuttle said. They’re even testing some of the products in the stores to determine if they have THC in them.”

Ames police said they plan to educate stores on CBD products with hopes that they pull the products off the shelves. 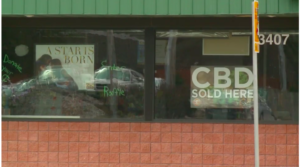